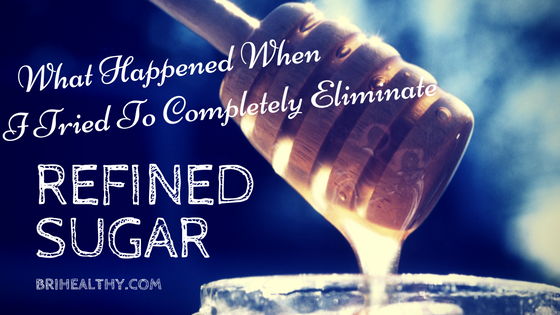 My Month-Long No Refined Sugar Challenge just wrapped up a few days ago and let me just say, it was the most challenging challenge I’ve created for Bri Healthy yet. I concluded that if I stayed in my house for the entire month and never went out, I’m sure I would have completed it. However, my social life brings me to various places and puts me in situations where I need food that I did not prepare on my own. You wouldn’t think it would be so difficult to avoid sugar at restaurants, cafes, or even in home-cooked meals, but it is. Oh, it is.

The elimination of sugary desserts was the easy part. One whole month without cake? That’s a piece of cake! The hard part was avoiding refined sugar in foods that shouldn’t require any refined sugar. These are items that contain “hidden sugars,” which are basically unnecessary additions of sugar to products that are not necessarily supposed to be sweet.

Given the addictive qualities of sugar, it’s no surprise that many food producers add the ingredient to their products. It’s there to keep you wanting more. Have you ever wondered why certain popular chips are so addicting? It’s because they add the sweet substance to their recipes. I always knew sugar was declared an addicting substance, but during this challenge, I truly felt and understood the addiction.

My boyfriend and I successfully consumed absolutely no refined sugar for seven whole days. It wasn’t the easiest thing (especially for him, the Pop Tart popping, cereal slurping, brownie inhaling human), but it was doable. On the eighth day, we took a trip to my hometown in Connecticut to visit family and friends. We were there for two days and we were not cooking for ourselves. We decided that when we went out to eat for most meals, instead of ordering lettuce leaves without other potentially sugar-added salad ingredients, we would allow ourselves to eat what we wanted and then get right back on track. We didn’t want to overdo it, so we mostly ate foods in which there was most likely added sugar, especially in the breads and sauces. However, I made a mistake when I ate some of a chocolate chip cookie that my boyfriend had bought. The next day, all I could think about was sugar. It was on my brain consistently. I’d forget about it, but it would pop back up. I was experiencing actual withdrawals. My brain wouldn’t release the thought until I satisfied the craving with a little bit of something sweet. Since I was back on track with the challenge at this point, I chose fruits as my sweets, which helped the cravings to subside.

Studies show that sugar truly is an addictive substance that produces similar neurological effects that addictive drugs do. It releases dopamine in our brains in a similar fashion as drugs like ecstasy produce. According to a study published in Neuroscience and Biobehavioral Reviews, rats underwent an experiment to determine whether or not sugar is an addictive substance. The rats were deprived of food for 12 hours, then they were given 12 hours of access to regular rat chow and also a sugar solution. The study showed that rats demonstrated behaviors including withdrawal, behavioral depression, and craving when the sugar was removed, and bingeing when the sugar was reintroduced. The scientists mentioned that these behaviors are indeed also common to drug dependency and addiction. They concluded that there is evidence to suggest that sugar indeed has addictive qualities that can be comparable to drugs.

Knowing that sugar is an addictive substance makes me want to reevaluate my consumption of the sweetener in my life. It’s so difficult to completely eliminate it, as I learned from this challenge, but it’s necessary to reduce the consumption of it in any situation you can. Sugar has so many negative healthy effects when consumed in excessive amounts, which can include type 2 diabetes, cardiovascular disease, weight gain, energy reduction, lowered mood, among many more. Some changes you can make to reduce sugar consumption can include:

I definitely gained some knowledge from taking the challenge. I developed a serious love for fruit, which I’ve always enjoyed, but now I understand how much more satisfying it is than refined sugar. I plan to buy more fruit and eat that as a dessert, rather than indulging in sugary treats. Most importantly, I’m not trying to tell anyone to completely abandon sugar. As you can tell by my experience, diets that completely eliminate a food group or a widely used ingredient are not as easy to stick to as a diet that practices moderation, such as the 80/20 rule, which states that if you eat fully healthy 80 percent of the time, you can indulge 20 percent of the time as well. Even if you didn’t get to attempt the challenge, you can and should still work on reducing your overall sugar consumption. I’ve concluded that one week is an ideal amount of time to eliminate refined sugar, and maybe two weeks could be an adequate challenge. But practicing moderation and limiting your overall consumption is the best bet.